A town in a palace

Split – the town proud of its superlatives

The best sporting town in the world

After the Olympic Games in Athens in 2004, Split was the town with the largest number of the medals in the world, considering the place the sportsmen come from! Furthermore, if we tried to calculate the statistic parameter of the success- fullness in sport for every town in the world (by dividing the number of its inhabitants with the number of the world’s top sportsmen), Split would probably top the list. The town of some 200,000 inhabitants has produced many world-famous sportsmen.

Although it snows very rarely in Split, possibly once in ten years, and there is no ice at all, the members of the Croatian national four-men team in bobsledding, coming from Split, succeeded in placing for the Winter Olympic Games.

How was it possible?  By training most of the time on land – on the athletic tartan track! 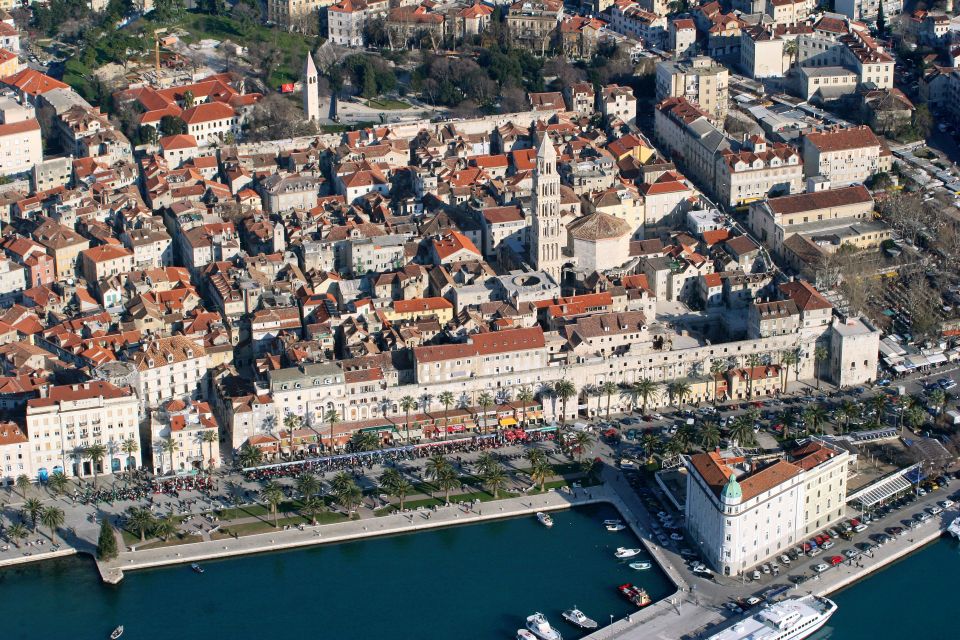 Split – a town in a palace

The Diocletian’s Palace is, together with St.Dujam’s church-tower, one of the symbols of Split. It is one of the best preserved monuments of Roman architecture in the world. It was designated a World Heritage site by UNESCO in 1979. The Palace is the only historic monument in the world to provide residence for a large number of people. The Palace was built between 295 and 305 A.D., as a combination of a summer residence and a Roman military camp, divided into four parts.

It was built of stone from the nearby island of Brač, and the decorative details such as sphinxes, carved decorations and marble were brought from Egypt and Greece. The Palace was only a few miles far from the nearest ancient town of Salona (today’s Solin). It was surrounded by defensive walls in order to protect the emperor Diocletian from the possible attacks of the surrounding barbarian tribes.

There are four gates to enter the Palace:

St.Dujam’s cathedral –the oldest Christian cathedral in the world

St.Dujam’s cathedral is considered to be the oldest cathedral in the world.as its seat is the oldest monument- emperor Diocletian’s mausoleum, built before Christianity was acknowledged as the state religion. In the middle of the 7th cent. the mausoleum of the emperor, who was known as a violent persecutor of the Christians, became a cathedral, with the altars of St. Dujam and St. Staš, the martyrs executed at Salona (today’s Solin).

Its inside had spherical form, with Diocletian’s sarcophagus, which was later ritually destroyed, the doorway at the entrance was carved in oak-wood, performed by Andrija Buvina from Split in the 13th cent. They represent an important monument of art of the Middle Ages. St.Dujam’s cathedral is a combination of different art styles – antique, the Midddle Ages, gothic, baroque and rococo.

The church-tower by the cathedral (57m) is one of the most famous Croatian Middle Ages structures. The entrance to the tower is guarded by stone-carved lions and two groups of dignitaries, symbolically carrying the columns, and the well-preserved staircase leads to the very top, from which the whole of the Palace and the town of Split itself can be clearly seen.

St.Dujam’s cathedral is also a very important liturgical place, attractive both to numerous believers as well as to tourists, especially during St.Dujam’s Day, the Split patron’s day (7th May).

Split – the most attractive historic locality for living in the world

The nucleus of the Diocletian’s Palace in Split is the most desirable historic town site for living in the world, according to “The Financial Times”. Split tops the list of ten towns, whose town centers are on the UNESCO World Heritage List. The towns were evaluated by Simon Thurley, architecture historian and adviser of the British Government for historic heritage, after analyzing 182 world localities under the UNESCO protection.

Here are ten most desirable historic localities for living, according to “The Financial Times”:

As it can be seen, the British expert was not very impressed by some even better-known destinations.

The bishop Grgur Ninski (Gregory from Nin) is a symbol of Croatian national pride, fighter for the mother tongue and script (lived in the 10th cent.). His bronze statue is the work the Croatian world-renowned artist Ivan Meštrović, who presented his work to the town of Split. Besides its monumentality that attracts visitors, they are even more attracted by the story about its big toe. All you need to do is just to touch it and make a wish…and it will come true!

A tiny breath of Egypt in Split

The spirit of ancient Egypt was brought to Split. The sphinx at the Peristyle is the biggest of the five sphinxes preserved in the town, and at the same time it is the oldest artifact in the Palace.

Having crushed the rebellion in Egypt in 297 and 298 Diocletian came in touch with the Egyptian culture and was so fascinated by it that he brought 13 sphinxes of black granite to his Palace. At his time the sphinx at the Peristyle was 1800 years old, and now it is 3500 years old. In ancient times a sphinx was a symbol of the divine character of Diocletian’s rule. As a response to Christianity, Diocletian proclaimed himself a reincarnation of the Roman god Jupiter.

The Split spite is a very special character feature of the inhabitants of this town, which, in a way, can explain why they succeed in achieving things that are usually considered either difficult or even impossible to achieve. The best translation of the word may be “spite but without any negative connotation”. It is the spite that results in success and turns losers into winners. Perhaps it is the best explanation why there are so many successful sportsmen from Split. Just because someone told them once they would never succeed! However, it is not typical of sports only but of any other activity. If you want anyone in Split to succeed in anything, just tell him he is not good enough for it.

Then wait and you will see!

Hvar: The most beautiful and the nicest smelling island in the world!

Makarska: The most beautiful beaches of the Adriatic!

Omiš: How the people from Omiš almost ate up Ulysses?

Trogir: With Kairos to a happy moment!